With Punjab Kings spending a record amount for Sam Curran, they would be hoping for positive returns from the world’s premium all-rounder at the moment. There is a small problem – the IPL curse.

Let’s take a look at the records. In 2008 auction, Mahendra Singh Dhoni was the most expensive player, and his team Chennai Super Kings finished lost the final to Rajasthan Royals off the last ball.

Andrew Flintoff and Kevin Pietersen were the most expensive players in 2009, each individually fetching $ 1.55 million. Flintoff’s CSK were eliminated in the semi-finals, while Pietersen’s Royal Challengers Bangalore finished runners-up that year.

New Zealand’s Shane Bond and West Indies’ Kieron Pollard were the most expensive players in 2010. However, Bond’s Kolkata Knight Riders finished sixth on the points table, while Pollard’s Mumbai Indians finished second. So close, yet so far.

The story continued in 2011 as well. This time for Kolkata Knight Riders who paid $ 2.4 million to buy Gautam Gambhir but their season ended in the elimination final. The team was placed fourth in the final points table. In 2012 CSK bought Ravindra Jadeja for $ 2 million and ended as the tournament’s runner-up. 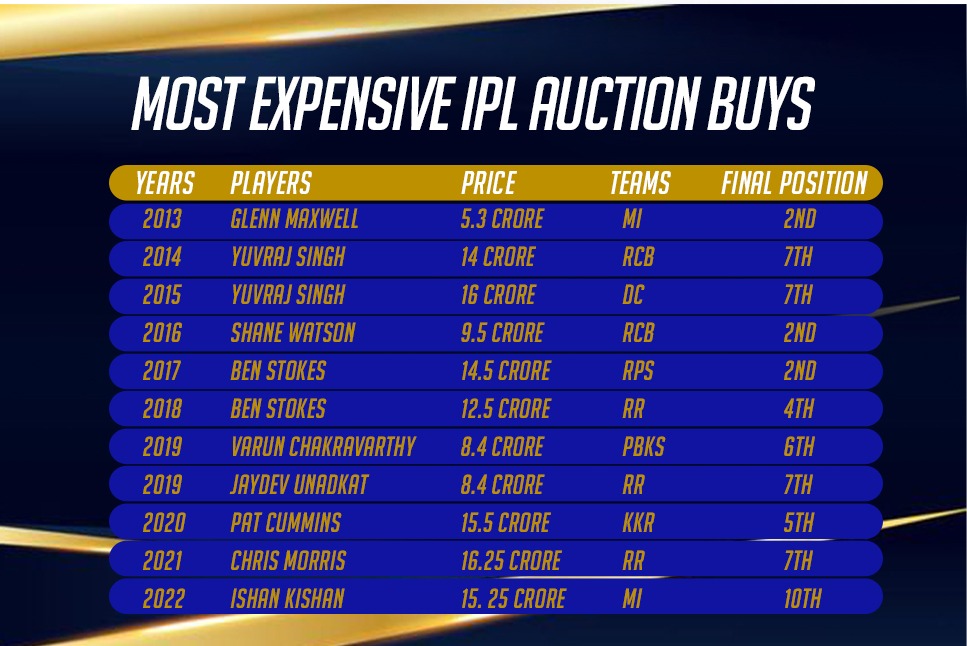 The year 2013 was the only exception when a team that bought the most expensive player also emerged as the winner. Mumbai Indians bought Australian all-rounder Glenn Maxwell for Rs 5.3 Crore and managed to win the title. They defeated Chennai Super Kings in the final at the Eden Gardens, Kolkata.

In addition to this, there have been a total of six instances when the teams made up the most expensive buys and finished as the runners-up.

Former Indian all-rounder Yuvraj Singh was the most expensive buy for both 2014 and 2015. However, both of his teams, RCB and Delhi Daredevils (now Delhi Capitals) finished at the 7th spot.

The curse continued in 2016 when Australian all-rounder Shane Watson was the most expensive player but his team RCB finished as the tournament’s runner-up. In 2017, Ben Stokes was the most expensive player, and his team, the Rising Pune Supergiants, was the runner-up. In 2019, Ben Stokes went to Rajasthan Royals, but his presence couldn’t turn the Royals into champions as they finished at the number 4th spot.

Between 2019 and 2022 – five different players, two overseas and three Indians have been the most expensive players for their respective franchises at the IPL auction, but none of them have managed to win the IPL title for their teams that season.

Now, all eyes turn towards Sam Curran. His presence did the trick for England at the ICC World Cup. Will he prove lucky for the Kings who since the inception of the IPL are looking for their maiden T20 crown?

Talking about Curran’s performance, he was the second-highest wicket-taker in T20 World Cup this year with a total of 13 scalps, with best bowling figures of 5/10. The 24-year-old is also a solid batter, with 1,731 T20I runs in 109 innings at an average of 20.85 and nine fifties.