After posting IPL 2022 season will be his last, Ambati Rayudu later deleted the tweet.© BCCI/IPL

Chennai Super Kings batter Ambati Rayudu on Saturday took to Twitter to announce that the ongoing Indian Premier League (IPL) 2022 season will be his last in the cash-rich league but later deleted his tweet. Taking to Twitter, Rayudu wrote: “I am happy to announce that this will be my last ipl. I have had a wonderful time playing it and being a part of 2 great teams for 13 years. Would love to sincerely thank Mumbai Indians and Csk for the wonderful journey.” 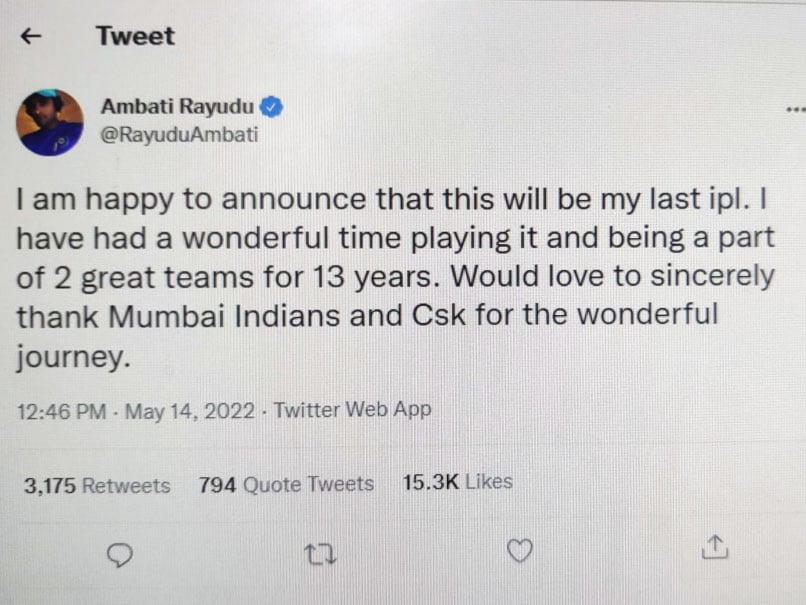 Over the years, Rayudu has become a key part of the CSK batting lineup and displayed both attacking and conservative game to bail his side out of trouble.

Before the 2018 IPL, Rayudu was picked up by CSK. The franchise had not retained the batter for the ongoing season, but he was picked up in the mega auction by the MS Dhoni-led side.

Rayudu’s IPL career began in 2010 with a stint with Mumbai Indians. In his first season, the right-handed batter had scored 356 runs in 14 matches.

Topics mentioned in this article

5 Players Who Might Be Playing Their Last IPL Season

Actual Rivalry Would be The Pinnacle of Test Match Cricket for India and Pakistan: Ricky Ponting

One-day cricket match cancelled due to rain : The Tribune India